There has been a lot of talk in recent months about how bad the deforestation problem is in Romania, especially related to the expansion of the Austrian company Schweighofer. Although there is a lot of chit-chat in the media and on the internet on the subject, data and facts are not that easy to find. Not that easy — unless you make a bit of an effort: it turns out that a massive dataset on forest cover change in Eastern Europe is available for download, thanks to scientists at the University of Maryland who have published a paper on the dataset in the journal Remote Sensing of Environment.

The dataset is based on Landsat imagery collected between 1985 and 2012 and has a pixel size of 30×30 meters. It can be downloaded from this website. I am especially interested in what’s going on in parts of the Carpathians, because that’s where I grew up and went on lots of hikes and through lots of adventures in the 1980s and early 1990s. What follows are a few screenshots that give an idea about what is possible to see with this data.

This first image shows the whole Carpathian – intra-Carpathian area. There are five colors that correspond to different histories of forest cover: black pixels are places without forest during the time of study; green is stable forest; blue is forest gain; red is forest loss; and purple is forest loss followed by forest gain [there are two additional categories in the data, but they are not very common in this area].

The good news is that there is a lot of green in this map, which means that about 28.5% of the Carpathian area was continuously covered by forest since 1985. An additional 3.4% was without tree cover in 1985, but has gained forest cover since then. The forest is gone from 1.5% of the area; and 1.7% has lost and then regained tree cover.

If we zoom in to the ‘bend’ area, which is essentially the southeastern corner of Transylvania, Romania, it becomes more obvious that, although the big picture doesn’t look very bad, some places have been affected fairly significantly over the last three decades: 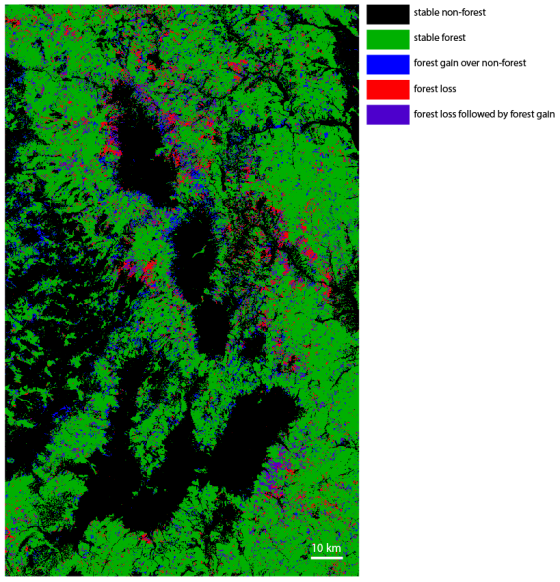 The black, forest-free patches in the middle are young intramontane basins with no forest. Deforestation looks to be more of a problem in the the Ciuc/Csík and Gheorgheni/Gyergyó basins. Let’s have a closer look at the Csík Basin: 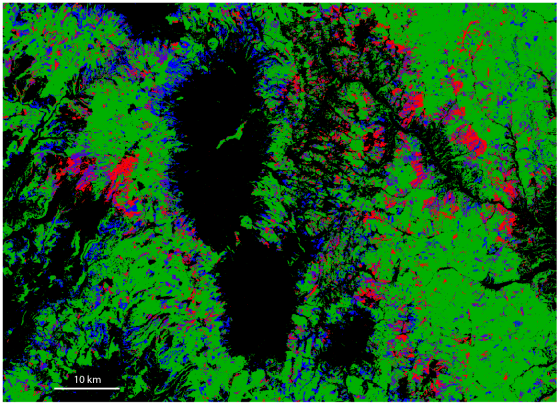 A further zoom-in shows one of the areas with the most forest loss, the western side of the Harghita Mountains:

I am going to stop here; but this dataset has a lot more to offer than I showed in this post. The conclusion from this certainly shouldn’t be that everything is fine; often the issue is not so much the quantity of the forest being cut, but *where* it is being cut. Protected areas and national parks should clearly be green and stay green on these maps; and the Romanian Carpathians could use a few more protected lands, as many of these forests have never been cut (unlike a lot of forests in Western Europe).

I have used IPython Notebook with the GDAL package to create these images. The notebook can be viewed and downloaded over here.