A couple of months ago I have written about some coastal ‘chevron dunes’ that have been interpreted as the onshore deposits of humongous tsunamis. The subject has been on the tip of my fingers for quite some time and I thought I managed to google up most of the related papers, news articles, and blog posts, but it turns out that I missed one highly relevant discussion: in the January 2008 issue of GSA Today, there is a short paper by Nicholas Pinter and Scott E. Ishman of Southern Illinois University, entitled “Impacts, mega-tsunami, and other extraordinary claims“. [Note to self: looking things up in Google and Google Scholar is not always enough, not even for blogging.]

Pinter and Ishman criticize both the idea that several impact-related megatsunamis occurred during the last 10,000 years and the hypothesis that a 12,900 year old impact caused “Younger Dryas climate event, extinction of Pleistocene mega-fauna, demise of the Clovis culture, the dawn of agriculture, and other events”. The first idea is promoted by Dallas Abbott (at Lamont Doherty Earth Observatory) and her co-workers, but there is no real peer-reviewed publication yet; the second has been put forward by Richard Firestone (of the Lawrence Berkeley National Laboratory) et al. in Proceedings of the National Academy of Sciences and a book. The evidence for the 12.9-ka impact includes magnetic grains, microspherules, iridium, glass-like carbon, carbonaceous deposits draped over mammoth bones, fullerenes enriched in 3He, and micron-scale “nanodiamonds”. Pinter and Ishman suggest that

the data are not consistent with the 4–5-km-diameter impactor that has been proposed, but rather with the constant and certainly noncatastrophic rain of sand-sized micrometeorites into Earth’s atmosphere.

But I am going to focus here on the ‘chevron dune’ part of the story. Pinter and Ishman have essentially the same main issue that I have blogged about: landforms that are morphologically identical to the so-called chevron dunes are well-known in the literature and they are called parabolic dunes. There is no need to introduce a new term:

We suggest that these Holocene features are clearly eolian, and that the term “chevron” should be purged from the impact-related literature.

The eolian origin of the alleged megatsunami deposits is difficult to deny taking into account that wind direction measurements at two sites perfectly match the orientation of the sand dunes (figure from Pinter and Ishman): 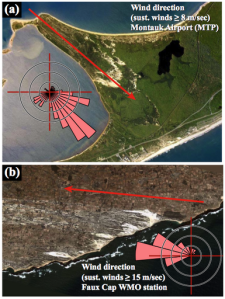 Dallas Abbott and her co-workers address Pinter and Ishman’s criticisms in a short reply. This is what they have to say about the chevron dunes:

Pinter and Ishman also claim that chevron dunes in Madagascar and on Long Island are aeolian in origin. We visited both locations and found many features that seem incompatible with an aeolian origin. First, parts of the chevrons in both locations contain fist-sized rocks. These rocks are too large to be transported by the wind. Second, the orientations of the chevrons do not match the current prevailing wind direction. In both areas, some of the thicker sand deposits are being reworked into classic windblown dunes. The direction of movement of these dunes differs 8° to 22° from the long-axis of the chevrons. Third, the degree of roundness of the grains in the chevrons is not characteristic of wind transport over long distances. In both locations, sand grains on the distal ends of the chevrons are not well sorted or well rounded. Sand moved by the wind obtains an aeolian size and sorting distribution after only 10–12 km of saltation transport (Sharp, 1966); however, at Ampalaza in Madagascar, the chevron is >40 km long and rises to 63 m above sea level. At its distal end, the chevron is 7.2 km in a direct line from the coast and contains unbroken, unabraded marine microfossils and conchoidally fractured sand grains. It is impossible to transport unabraded marine microfossils to this location via wind-generated saltation. The site is too far above sea level for storm waves, and there is no local agricultural activity. The chevron was deposited by a tsunami.

Well, these seem valid counterarguments at first sight — but it would be nice and it would be time to see actual data: images, measurements, grain size distributions. Which parts of the chevrons are reworked into eolian dunes? What is the difference in the morphology of tsunami dunes and eolian dunes? How does this relate to flow dynamics? What are those “rocks” that occur within the dunes? Where do they occur exactly? And so on. The fact that the authors end their reply with an unqualified strong statement like “The chevron was deposited by a tsunami” suggests that they are unwilling to admit that not every piece of evidence favors their interpretation and that some legitimate questions can be raised. They do this after first admitting that parts of the dunes were indeed reworked into classic wind-blown dunes.

So, at least as far as the ‘chevron dunes’ are concerned, I have to concur with Pinter and Ishman’s harsh conclusion:

Both the 12.9-ka impact and the Holocene mega-tsunami appear to be spectacular explanations on long fishing expeditions for shreds of support. Both stories have played out primarily in the popular press, highlighting how successful impact events can be in attracting attention. The desire for such attention is understandable in an environment where science and scientific funding are increasingly competitive. The National Science Foundation now emphasizes “transformative” research, and few events are as transformative as an impact. In an era when evolution, geologic deep time, and global warming are under assault, this type of “science by press release” and spectacular stories to explain unspectacular evidence consume the finite commodity of scientific credibility.

If there was an icon for ‘blogging on non-peer-reviewed non-research’, in the style of ‘blogging on peer-reviewed research’, this post would qualify for it. Although it is advertised as publishing “cutting-edge, peer-reviewed, creationist research papers”, Answers Research Journal (published by Answers in Genesis) is definitely not cutting-edge, not peer-reviewed, and is clearly not research. The evidence: the first few materials that are available online. There is a paper on “catastrophic granite formation”; here is a passage that gives you a flavor:

“Thus the formation of granite intrusions in the middle to upper crust involves four discrete processes — partial melting, melt segregation, magma ascent, and magma emplacement. According to conventional geologists (Petford et al. 2000), the rate-limiting step in this series of processes in granite magmatism is the timescale of partial melting (Harris, Vance, and Ayres 2000; Petford, Clemens, and Vigneresse 1997), but “the follow-on stages of segregation, ascent, and emplacement can be geologically extremely rapid – perhaps even catastrophic.” However, as suggested by Woodmorappe (2001), the required timescale for partial melting is not incompatible with the 6,000–7,000 year biblical framework for earth history because a very large reservoir of granitic melts could have been generated in the lower crust in the 1,650 years between Creation and the Flood, particularly due to residual heat from an episode of accelerated nuclear decay during the ﬁrst three days of the Creation Week (Humphreys 2000; Vardiman, Snelling, and Chafﬁn 2005). This very large reservoir of granitic melts would then have been mobilized and progressively intruded into the upper crust during the global, year-long Flood when the rates of these granite magmatism processes would have been greatly accelerated with so many other geologic processes due to another episode of accelerated nuclear decay (Humphreys, 2000; Vardiman, Snelling, and Chafﬁn 2005) and catastrophic plate tectonics (Austin et al.1994), the likely driving mechanism of the Flood event.”

Here is what I honestly do not understand. Let’s accept for a moment the idea that granites can form relatively fast, and pretend that radioactive dating has some major issues, as these people claim (it doesn’t, of course), so that all the granites on Earth fit the 6000-year timeframe. But what about the stuff that the granites were generated from? That must be older, right? And if the whole crust is less than a few thousand years old, what about the mantle? And, if one can speculate about “accelerated nuclear decay during the ﬁrst three days of the Creation Week” or “catastrophic plate tectonics”, why not just say that granites were created on the second day, after the mantle was ready to start convection by the end of the first day? Or, even better and simpler (Occam’s razor!), why not just come up with something like:

And God said, Let there be granite: and there was granite. And God saw the granite, that it was good: and God divided the crust from the mantle.

I am looking forward to the time when somebody realizes that the Universe was created yesterday, and it is only an illusion that we have been around for a bit longer than that. Imagine all the wonderful research opportunities that such a revolutionary working hypothesis would generate. I can already see papers and headlines like:

Updated relativity theory shows that time is shorter than you think

Plate tectonic hit-and-run: after hitting North America yesterday with several microcontinents, the Pacific Plate continued to subduct as if nothing happened

Fossil record from 4:15 pm yesterday shows that lightning-fast giant snails were abundant on Earth for more than 7 minutes

UPDATE: In my rush to publish the above results, I forgot to mention some previous work on similar subjects: Afarensis – an expert in points to the Precambrian archaeology –ist, who suggested long ago that the Cambrian explosion was caused by a bacteria trying to form a synthesis with a mitochondria and that peanut butter is a leftover from this explosion. I would only add that there is new evidence suggesting that the Precambrian started at 1 am yesterday, after Creation Hour ended, and it probably lasted for several hours, until the bacteria committed adultery.

The scepticism that I advocate amounts only to this: (1) that when the experts are agreed, the opposite opinion cannot be held to be certain; (2) that when they are not agreed, no opinion can be regarded as certain by a non-expert; and (3) that when they all hold that no sufficient grounds for a positive opinion exist, the ordinary man would do well to suspend his judgment.

These propositions may seem mild, yet, if accepted, they would absolutely revolutionize human life.]