The allegedly tsunami-related chevron-shaped nearshore deposits are back in the center of attention, at least among geo-bloggers. And rightly so: the idea that lots of coastal sand sheets all over the world were generated by relatively recent, impact-related mega-tsunamis of unimaginable scale is a fascinating hypothesis and, if proven true, it would revolutionize not only our understanding of frequency of meteorite impacts, but also change the predominant views about coastal geomorphology.

However, I have to confess that I find the geomorphologic and sedimentologic side of the argument fairly weakly constructed and documented, at least in the papers I was able to google up. Here are a few questions that could be asked to clarify some issues.

Many of the aerial photographs of the so-called chevrons could be used as textbook examples of parabolic dunes. Parabolic dunes are U-shaped wind-blown dunes usually fed by coastal sand deposits. Their nose points in a downwind direction, that is, the opposite way from barchan dunes. While wind strengths, direction, and sediment source are the main players in the generation of barchan dunes, vegetation plays a key role in the development of parabolic dunes. The ‘arms’ of a parabolic dune are left behind because they have a lower migration rate than the main body and the nose. The lower migration rate is due to plant growth in areas of lower sedimentation and/or erosion. There is a strong correlation between vegetation cover and dune migration rate or activity. This image comes from a recent paper by Duran et al., 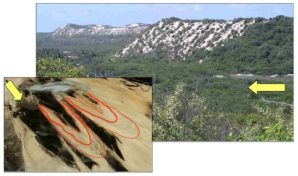 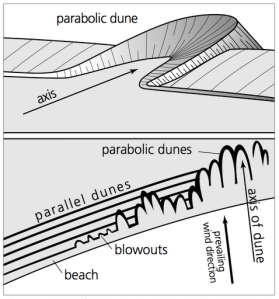 So the question is: if ‘chevrons’ are indeed different from classic eolian parabolic dunes, what is this difference, both geomorphologically and sedimentologically? Are they internally stratified? Do they show large-scale cross-bedding? What are the typical grain size distributions? Are they different from typical wind-blown sand? (One of the arguments is that large boulder fields occur in several places; however, my impression is that the boulders described here do not occur within, below, above, or right next to any chevron deposits. This short report claims that large pieces of rock are all over the place in the Madagascar chevrons, but no actual data is presented). The Madagascar chevrons featured in the New York Times show the signatures of typical parabolic dunes: U-shape, vegetated back sides and sandy crest plus nose. Why would an old tsunami deposit be vegetated only in certain places? The simple fact that these dunes are not entirely covered by vegetation suggests that their sandy parts do consist of wind-blown sand. Of course, tsunami deposits can be reworked by the wind, but why would the tsunami-related morphology be so well in tune with the eolian signature?

Second, if the chevrons are indeed produced by tsunamis, the tsunamis must have been humongous. Dune heights are related to flow depth, and a rule of thumb is that flow depth has to be around 6 times the dune height. So a 50 m high dune would require a 300 m high wave. Is that really possible? How big an impact do you need to generate such humongous waves? Also, what about the backwash? Why are most of the chevron dunes pointing systematically in one direction, and do not seem to be altered by any seaward oriented flow?

Third, are any features of the chevrons consistent with what we know about well-documented recent and ancient tsunami deposits? Tsunami-related sandy layers tend to be comparable to turbidites: largely unstratified, normally graded units suggesting rapid deposition from flows of decreasing velocity; they do not show large-scale cross bedding that requires relatively steady flow over longer time scales. In contrast, the chevron morphologies suggest that they are internally well-stratified, as the result of stoss-side avalanches. Here is a sand layer from the 1998 Papua New Guinea tsunami (source):

Obviously, it may turn out that there are tsunami-related coastal dunes and wind-blown parabolic dunes, with very similar morphologies, but fundamentally different origins. At the moment, the geomorphologic and sedimentologic evidence for this extraordinary hypothesis seems quite preliminary. And, needless to say, extraordinary claims require extraordinary evidence.

ps. 1: Lots of information on tsunami deposits here.
And a paper arguing for wind-blown origin of some deposits from the Bahamas, previously interpreted as tsunami-related: Kindler, P. & Strasser, A. (2000) Palaeoclimatic significance of co-occurring wind- and water-induced sedimentary structures in the last-interglacial coastal deposits from Bermuda and the Bahamas. Sedimentary Geology 131, 1-7.

ps. 2: More good stuff on megatsunamis and their deposits at Highly Allochthonous.

3 thoughts on “Some questions about the ‘megatsunami-chevrons’”