I have pledged a while ago not to blog about Peyto Lake anymore, but I have recently discovered some beautiful GPR profiles that I have to share to make the story more complete.

Derald G. Smith of the University of Calgary and Harry M. Jol of the University of Wisconsin – Eau Claire have looked at the internal structure of the Peyto Lake delta using a technology called ground-penetrating radar (GPR). The principles used in GPR data acquisition are similar to those of reflection seismology, but electromagnetic waves are used instead of acoustic energy, and reflections occur at boundaries with different dielectric constants rather than boundaries with different acoustic impedances. Compared to reflection seismic surveying (or digging a deep hole), the nice thing about GPR is that it is non-destructive: it can be used in situations where you want as little disturbance as possible. For example, it would be a bad idea to do seismic surveying of a leaking reservoir, but it is OK to look for the leaks using GPR. GPR is also used by archaeologists.

But let’s return to Peyto Lake. Although it has long been postulated that coarse-grained deltas with steep slopes (called Gilbert deltas, after the American geologist G.K. Gilbert) have a simple internal structure consisting of a topset, foreset, and bottomset, – and there are numerous ouctrop examples that show small coarse-grained deltas with such a structure -, it is not easy to prove that modern-day active deltas behave the same way. You can easily walk around on the top of the Peyto Lake delta and examine the surface morphology and characteristics in as much detail as you want; but without cool technology like GPR you can only wonder what does it look like inside. [Digging a large trench in the middle of one of the most beautiful national parks is not an option.] So Smith and Jol set out to check whether the topset-foreset-bottomset geometry is valid for this delta or it has a more complicated internal structure.

With only one day of data collection in the field (kind of unusual in the earth sciences!), they have clearly shown that the river feeding Peyto Lake is indeed building a textbook example of a simple Gilbert-type delta. The near-horizontal topset layers consist of gravels deposited by the braided river that is active today on the top; the underlying foresets are also likely to be coarse-grained and they dip at about 25 degrees toward the lake. This angle is close to the underwater angle of repose.

It is somewhat puzzling why the authors do not talk at all about the fate of finer-grained sediments (sand, silt, mud) that enter the lake; it is clear that turbidity currents directly originating from the river mouths are important agents of sediment transport in the lake (see more about this here). [They were probably focusing on presenting the results of the GPR survey.] The GPR signal is strongly attenuated in sediment finer than sand, and this might be the reason why reflections get poorly defined in the area where the bottomset is supposed to develop. In fact, I am not convinced I can differentiate the ‘bottomset facies’ the authors talk about.

So here is a representative GPR dip section showing the topset and the foreset: 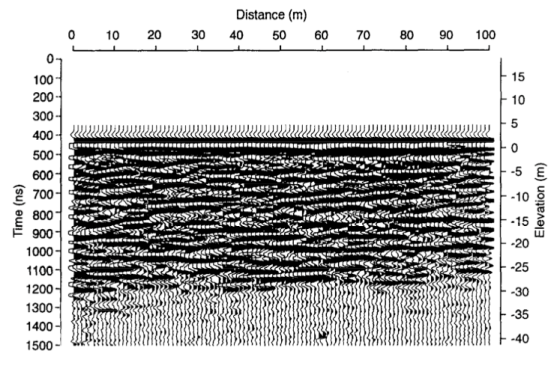 4 thoughts on “The internal structure of the Peyto Lake delta”