I was on my way to San Francisco / AGU last week when I saw these volcanoes and shot these pictures through the airplane window. It turns out that this is the Lunar Crater volcanic field in Nevada, named after the largest crater that is more than 1000 meters across and about 130 m deep. There are 95 vents that are 4.2 million to 15,000 years old. Lunar Crater is the largest feature in the image below; it is a maar; most of the other vents formed cinder cones. 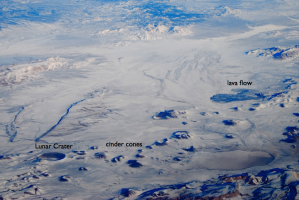 Here is a map showing the Houston – San Francisco flight track and the location of the volcanic field: