The Late Permian Castile Formation is a ~500 m thick accumulation of evaporites in west Texas and south-eastern New Mexico. Its most striking feature is the vast number of alternating thin layers of lighter- and darker-colored deposits, layers that seem to be continuous across most of the Delaware Basin. The white laminae are mostly gypsum and anhydrite; the darker layers consist of calcite and organic matter.

Most experts agree that these laminations reflect seasonal changes; that is, a pair of white and dark layers corresponds to one year. The thicker gypsum layer was deposited during the dry season; the thinner calcite layer with the organic material formed during the humid season when algae were more abundant and only carbonates could precipitate from the lower-salinity water [for more details, see this paper]. 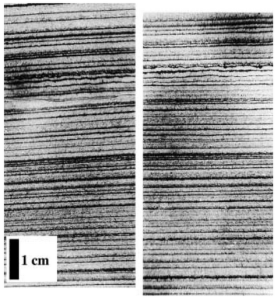 The image above gives an idea how laterally persistent these laminations can be; the two photographs come from cores that are 24 km (~15 miles) apart (source: Kirkland, D.W., 2003, An explanation for the varves of the Castile evaporites (Upper Permian), Texas and New Mexico, USA, Sedimentology 50, p. 899-920).

These evaporites are often affected by small-scale faulting and folding; the resulting patterns are quite variable and aesthetically pleasing (well, at least according to me). I shot these photos on a recent geological trip to Guadalupe Mountains National Park, in a roadcut near highway 180; more pictures here.

4 thoughts on “Evapor-art from the Permian Castile Formation, west Texas”