Recently I had a chance to revisit a fantastic hiking trail in the Bucegi Mountains, located in the Romanian Carpathians (or Transylvanian Alps, for those who prefer a more exotic name). The Bucegi are among the most spectacular hiking and climbing places in Eastern Europe, with some of the tallest cliffs in the region. Back in the good old days when I used to live closer to some significant topographic relief (as opposed to a living on a %^$#@ flat passive margin), this hike was one of our favorites. The main attraction is a steep climb along a valley floor that usually has some snow even during the summer months. In the steepest sections there is no proper trail and usually there is nobody else around; this is the perfect place if you want some outstanding scenery without the crowds.

The predominant rock type in these mountains is the Bucegi Conglomerate, a Cretaceous formation with lots of limestone clasts. The limestone pebbles, cobbles and boulders were eroded from Jurassic carbonates that outcrop in the western parts of the Bucegi. This is one of the thickest conglomerate accumulations I have seen and I know of; its thickness reaches 2000 meters in places. It was probably deposited as fan deltas along a rocky coast, with rivers that were directly depositing coarse-grained sediment onto a submarine slope. There is evidence for deposition by sediment gravity flows: many conglomerate layers show no obvious stratification (which one would expect in a river deposit) and normal  grading is common. Toward the top, there is one spectacular layer, likely deposited by a single flow, with limestone blocks tens of meters across. [These blocks are often called olistoliths.]

Typical Bucegi Conglomerate (photo taken in 1995)
Originally these rocks were described as ‘molasse’ (one of those terms that probably were invented only to hide our ignorance about the relationships between mountain building and sedimentation), likely reflecting deposition in shallow marine environments. In the late seventies, when the idea that thick piles of coarse sediment could be of deep-marine origin was still big news in geology, the Bucegi Conglomerate actually made it onto the pages of Nature.

In any case, our hike in June was long and strenuous (see the map above), but the weather was outstanding and we had the whole mountain to ourselves: apart from the meteorologists at the Omu Peak, we haven’t seen a human being while hiking.

Here are a few more photographs (see the rest at Smugmug):

The artist previously known as erosion 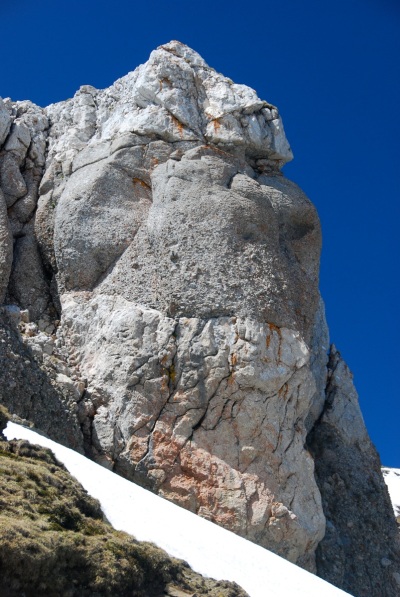 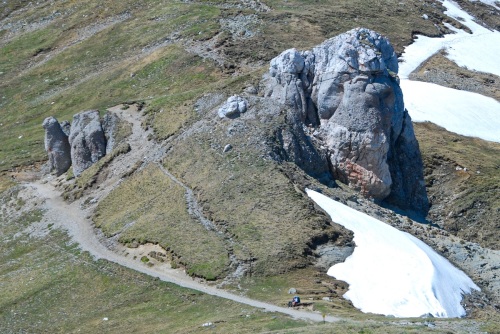 This picture gives an idea how big the limestone blocks in the previous photo are: note the two guys in the front for scale

2 thoughts on “A hike in the Bucegi Mountains, Romania”